skip to main | skip to sidebar
This blog is about the mistakes and misrepresentations of animals in movies.
Have you seen a suspect appearance of an animal in a (mainstream) movie? Let me know!! 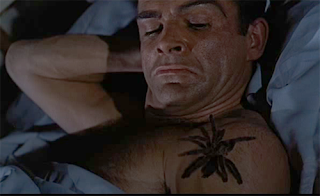 In his long career with MI6, James Bond finds himself facing some adversaries that cannot be swayed by any amount of charm and sophistication; giant spiders, scorpions, snakes and sharks (without friggin’ lasers on their heads). When investigating the secretive operations of Dr. No in the Caribbean, he gets a tarantula placed in his hotel room by Dr. No’s henchman Prof. Dent (back in the day when being evil still required a PhD). In the middle of the hot Caribbean night, James is woken up by something crawling up his body. In the next shot, we see the spider walking on a faceless man’s body. When Sean Connery’s face is shown again however, the spider seems to be either walking on a sheet of glass, or is superimposed on his body. Apparently it was decided to not have the spider walk on Connery’s body. Either the actor himself understandably decided he did not want this scary thing on his body, or the crew decided they did not want their star actor to take any risks. But the risk for either Bond or Connery would have been minimal. The famous spider belongs to the genus Avicularia or pink-toed tarantulas, a group of tree-living spiders common in the Caribbean and central America. But although the spider was certainly well-placed in the general setting of the movie, Dr. No obviously was no arachnologist. If he was, he would have probably known that Avicularia spiders have relatively small teeth, are reluctant to bite, and are not lethal or even dangerous to humans. Bites of these spiders produce local pain and discomfort, and would have probably only ticked Bond off. But the spider did not even need to bite him to meet Bonds wrath, and his slipper.
Posted by zoologist at the movies at 3:09 PM

zoologist at the movies
I am an animal biologist, and was often entertained by the nonsense shown in movies about animals. Although it's entertaining to me, I needed to set the record straight. So in this blog I try to show what interesting creatures hide behind their flat Hollywood characters.